20 Hysterical Airport Fails That Will Prove You Should Avoid Airports

Air travel is fast but also very frustrating at the same time, you can't just go from point a to point b without having to go through the longest queues, endless security checks, delays, cancellations, lost luggage… you get the deal, it's just not worth it anymore because that's just the tip of the iceberg. But we can't just put all the blame on airlines since it's mostly people who are causing all of the pain and suffering. You will often find the weirdest looking people in airports out of all places, dressed in the weirdest outfits or just looking weird as hell.

The engine pretty much acts like an enormous vacuum cleaner so putting anything anywhere near it will end up getting swallowed by it. That thing looks pretty heavy, which proves just how powerful that turbine is. Someone is definitely getting fired over this. 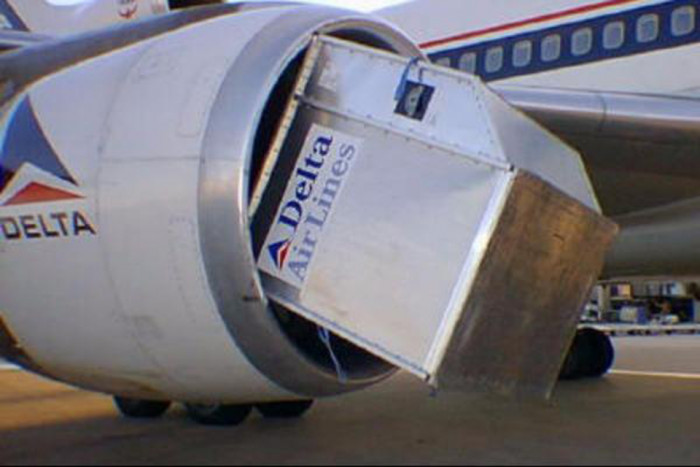 2. He looks so fabulous

This guy gives absolutely zero f*cks, he doesn't care about your opinion or about what is socially acceptable for a man to wear. He's stealing the spotlight from all of the other passengers in that airport and making everyone else look bad in comparison to him. Just look at his posture and facial expressions, it takes some real confidence to do this, this man is truly iconic. 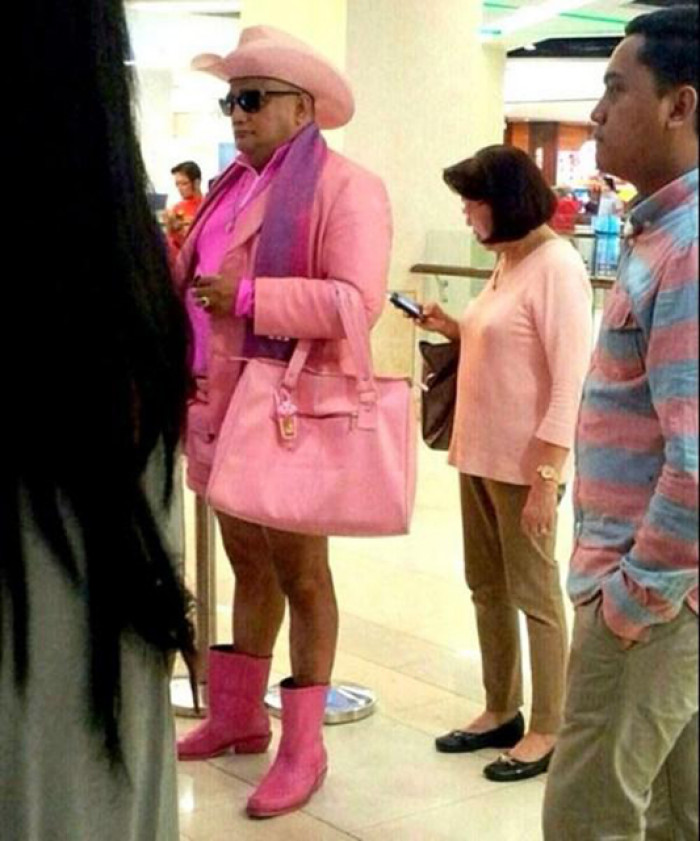 3. She tried to sneak him in

I've seen so many Youtubers fake it but this guy actually went through with it, which proves just how brave - or stupid - he is, I mean seriously, it takes some balls to actually do it, you could die from suffocation or at least get your neck broken or something like that. 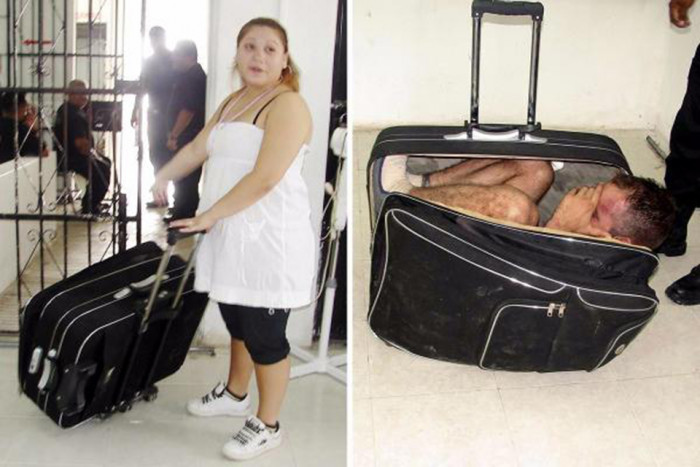 That's what happens when you attempt to park your plane while drunk, or I don't know... maybe he just slipped on the ice or got dragged over there by some kind of hurricane. If not, this guy is definitely getting fired over this, planes are expensive as hell. 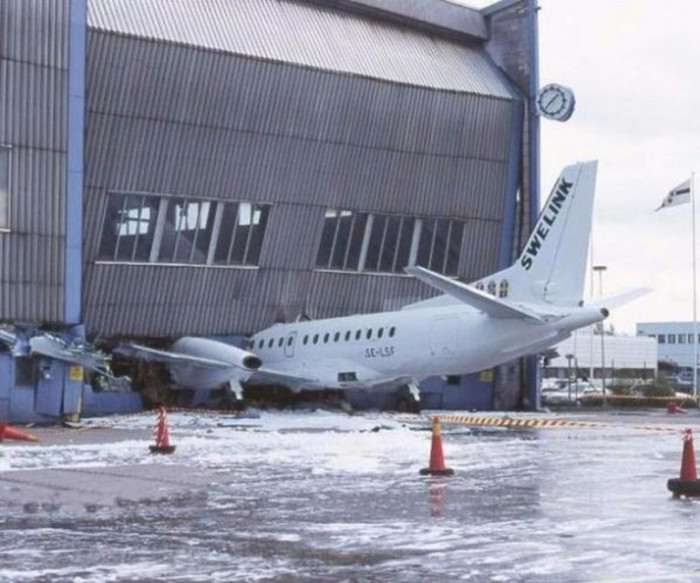 Airports are known for their lack of relaxation areas, sometimes you wish you could just lie down while waiting for your delayed flight. This guy took matters into his own hands and came up with a pretty clever idea to take a long nap without getting interrupted by his own reflexes. We just hope that he doesn't nap for too long and miss his flight because that would totally defeat the purpose. 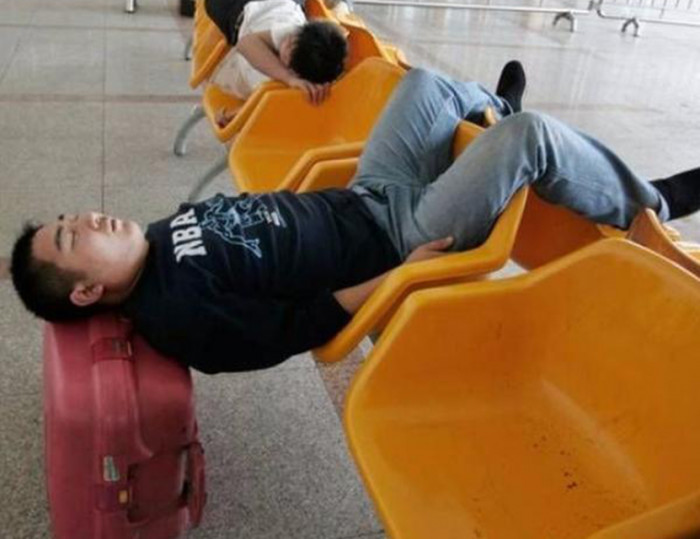 6. Bear with me for a moment please

You might think that this bear got lost on his way home and wandered off to this airport, but you'd be very wrong because this bear also has ambitions and dreams. He wanted to catch a flight to his dream destination, he's a real adventurer who's tired of being in the same place for all these years. 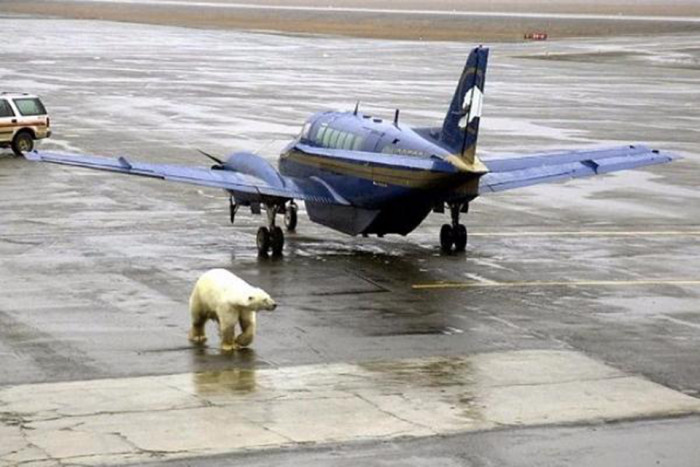 The general atmosphere of airports is usually very unpleasant and consists of sleepy and depressed people everywhere. Flights are constantly getting delayed or canceled and people start losing patience and hope, so as a result, you will often see exhausted passengers everywhere trying to get some rest anywhere remotely comfortable. This guy gave up entirely and decided to take a long slumber on a travelator. 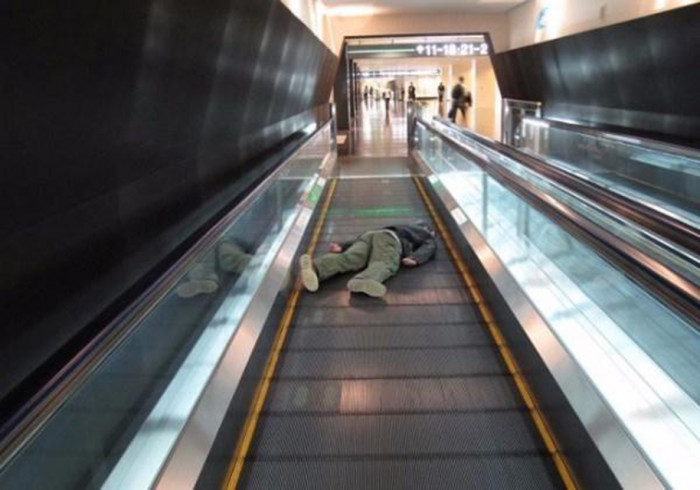 8. He totally elbowed the other plane

This incident happened in Heathrow Airport outside London, it covers an area of 12.14 km², but it's obviously not completely empty, a large portion of it is covered by various terminals, support buildings, control towers, parking lots, etc. So, even by adding all of those things to the equation, you will still have a lot of extra space left, which is more than enough to fit a plane without having it crash into the second one. But somehow, it still managed to happen. 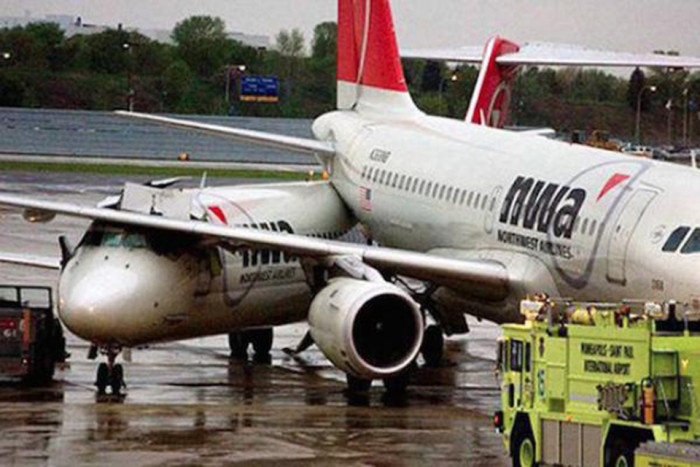 9. No thanks, Planes aren't supposed to do that

Advertising is a powerful tool that allows you to try convincing people to buy your product, but if you're making your company look bad with your own advertisement that you paid for with your own money, you're definitely failing in life, big time! 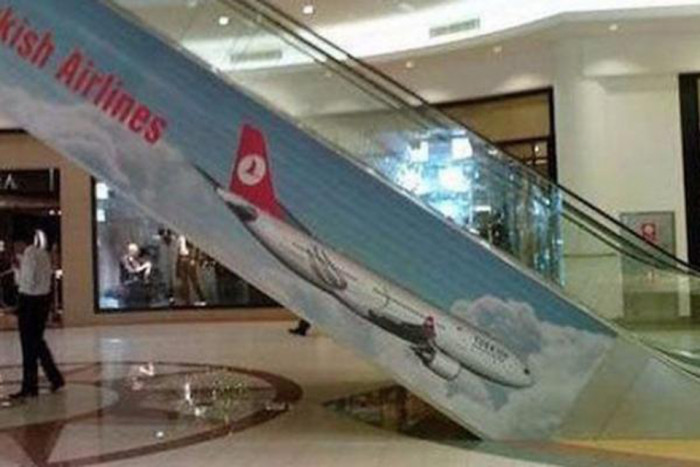 We've previously seen that it's very common for people in airports to take spontaneous naps pretty much anywhere, but this time we're not sure if this person is exhausted or just attempting to bring back an old dead meme, planking. If that's the case, then this person's life must be very sad. 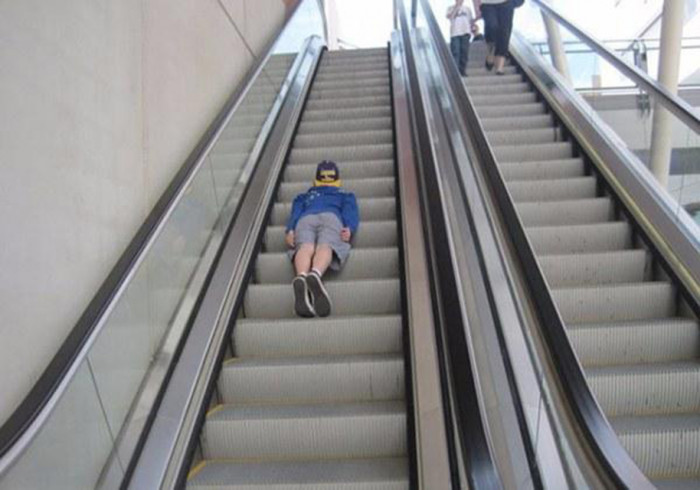 11. I think you got the wrong person lady

After successfully completing rehab, people want nothing more than to meet with their families and forget about their old addictions, but when you have someone like this lady in your family or circle of friends, kiss that thought goodbye because she'll make sure to remind you of it and also publicly share it with a place full of people who don't really care about you or your well being. 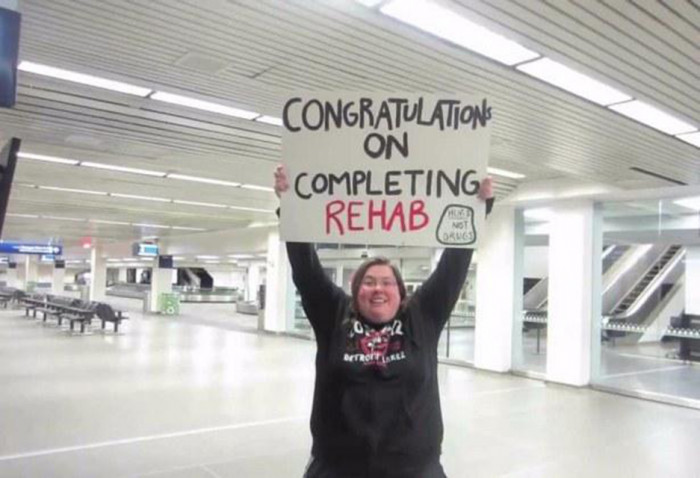 Santa must have a gambling problem since his reindeers are nowhere to be seen, he's flying economy just like the rest of us, which makes us all wonder how he is going to deliver all of those presents. He's probably retired and sold his reindeers to the highest bidder, now he's just living his life like a normal person. 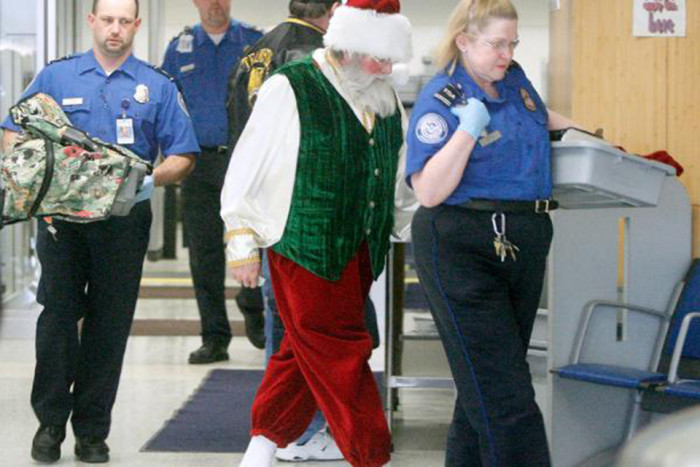 Another perfect example of how tiring and frustrating air travel is, we’re not sure if this person is sleeping or dead but it still says a lot about modern air travel. After waiting for several hours, you start losing your mind and napping starts feeling like the best escape from that hell. 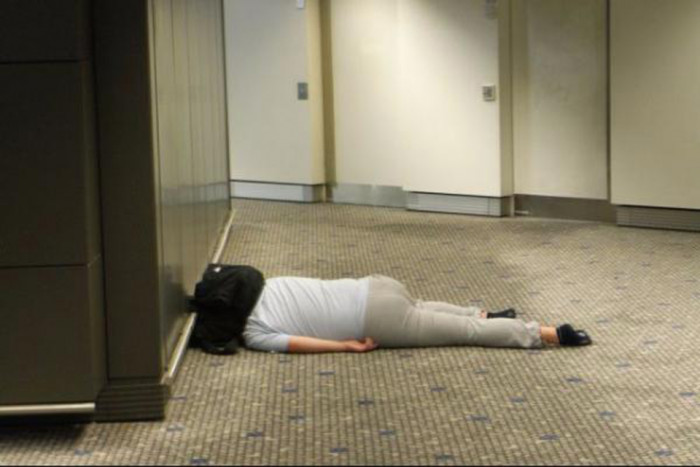 14. I wonder how comfortable that sleeping position is

Airports bring out people's creativity and they start coming up with new ways to sleep without even needing a bed. When you haven't had enough rest for a long time, you pretty much start losing your mind, which makes people stop caring about what the others might say about them and they just lay down pretty much anywhere remotely comfortable, like toilets, escalators, travelators, bathrooms etc... 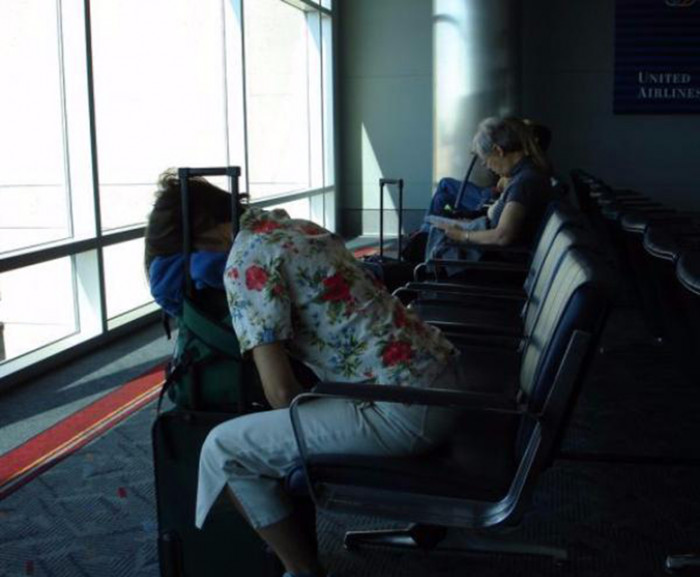 It's bedtime! This little princess couldn't handle all of the stress and frustration that comes with delayed flights and considering her small size she figured out that she could fit on top of her father's suitcase so she passed out on it and assumed that her dad will take care of transporting her wherever they have to go. That's one of the many perks of being a child. 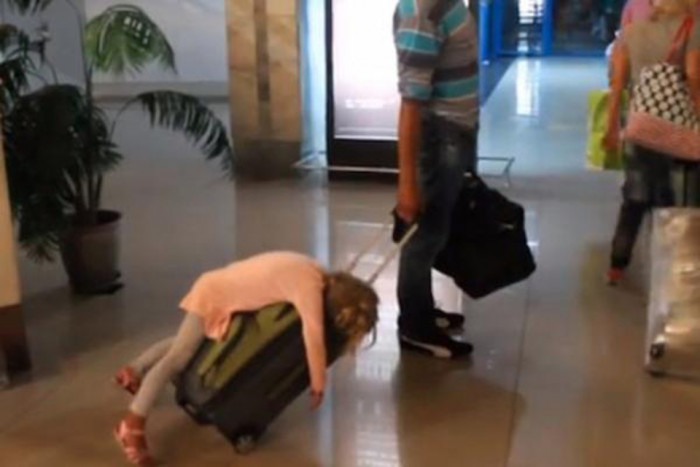 This isn't Walmart you can't just dress however you want to, I mean you technically can, but come on, why would you want to make my life more miserable than it already is. This is one of the reasons why most of the people we've seen previously decided to nap instead of being awake while waiting for their flight. 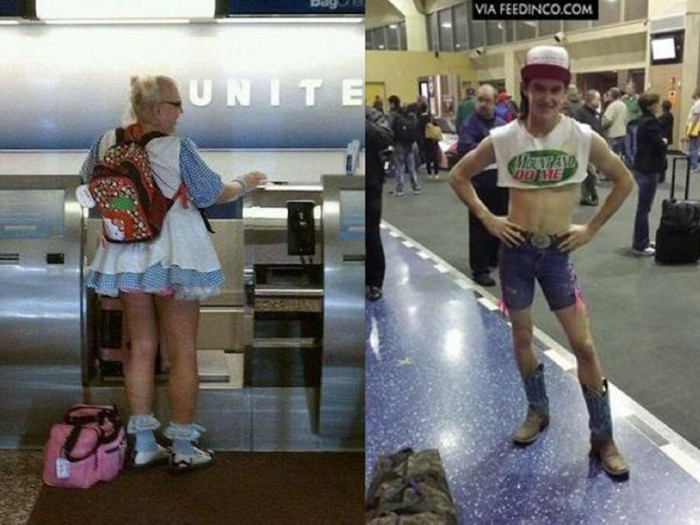 I used to think that celebrities would get some kind of special treatment in airports, but I guess I was wrong. Look at Rihanna's face, she's so pissed off that she has to go through what the common man is used to enduring, but I guess that's just life. 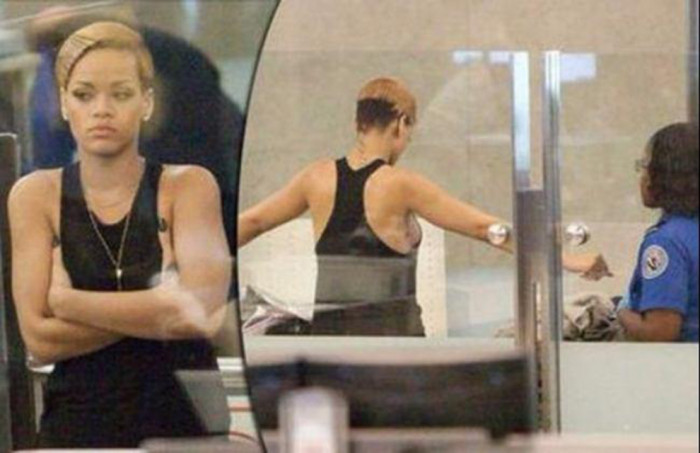 18. A couple of wild beach towels in their natural habitat

They already had their beach towels out because they couldn't wait to get to their destination, but life's a bitch, and delayed flights suckkk!! This is what collective disappointment looks like, they should hang this in a museum. 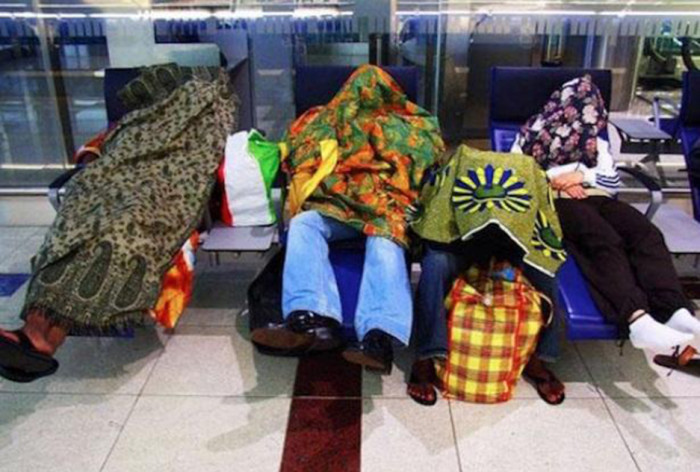 19. Being forced to fly with peasants suck

Even if you're a Hollywood star like Gwyneth Paltrow, you will still suffer from the same trials and tribulations as the rest of us. She seems like she's having a bad hair day in those pictures, which really proves that no one is perfect. 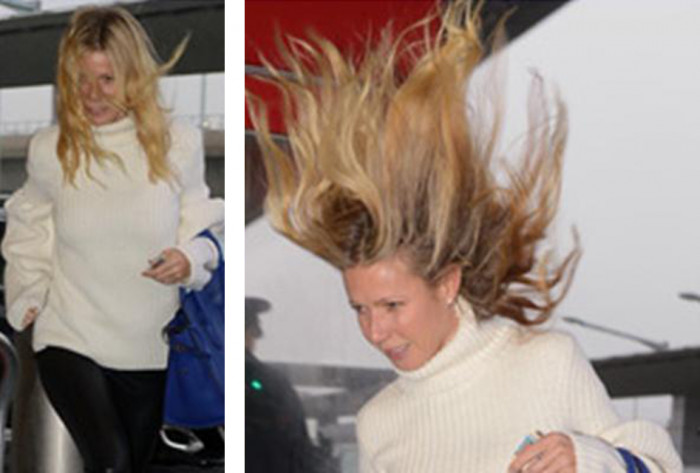 This girl definitely has superpowers, look at the way she managed to fit in there. She even managed to fold herself in half and took a deep slumber in that painfully uncomfortable position. Elastigirl? Is that you? 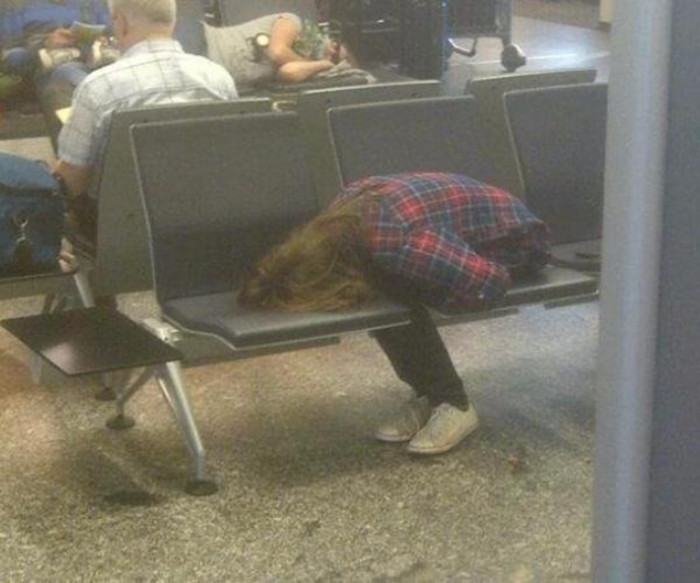