We have to give it to the rescuers that sometimes put their lives at risk to save an animal. Whether they are saving a dog, cat or even exotic animals like a chimp, they are doing great work and without them, we will have a big problem on our hands.

Without them, we will never be able to get justice for those animals that receive the bad end of life where they get mistreated and abused just because people feel like it. Some of us can't understand why a person would do such a thing, but some people are just born to use and abuse.

Last week a rescue team from Liberia Chimpanzee Rescue and Protection (LCRP), with the help of police and the FDA rescued a baby chimp in a store in Kakata, Liberia after they received an anonymous tip.

Chance is the chimp's name and she appeared to be about one-year-old. Her so to be "owners" have been keeping her as a pet in the store for a few months. It's not clear how they came about her, but the rescue team had a suspicion.

"We know her mother was killed," founder of LCRP, Jenny Desmond said. "One cannot acquire a baby chimpanzee without first killing his or her mother and other nearby adult family members. The adults are butchered and sold on the black market for bushmeat and the infants are kidnapped and sold into the live pet trade, both locally and internationally." 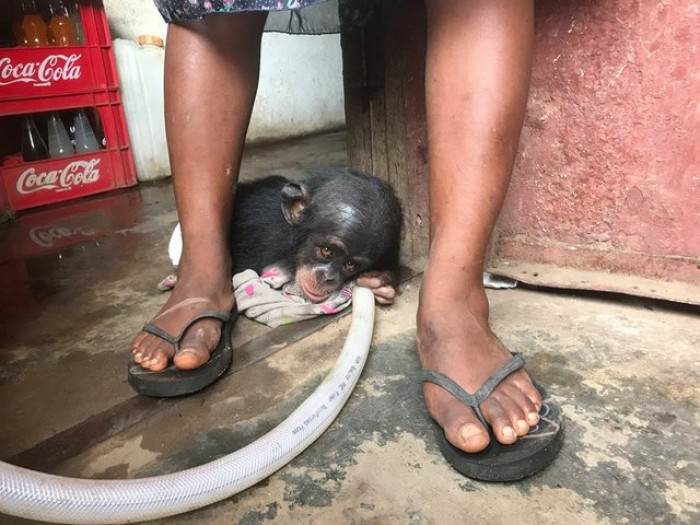 After Chance lost her mom in a very tragic way she would have needed a lot of love and nurturing. But instead of doing that her owners put her in a cardboard box in a corner in the shop and left her there.

"It seems she spent most of her time in the box, and when outside the box, on the concrete and dirt ground at the shop," Desmond said. "It does not seem she was picked up or held very often as she has had to learn how to be picked up and cling to me since we rescued her." 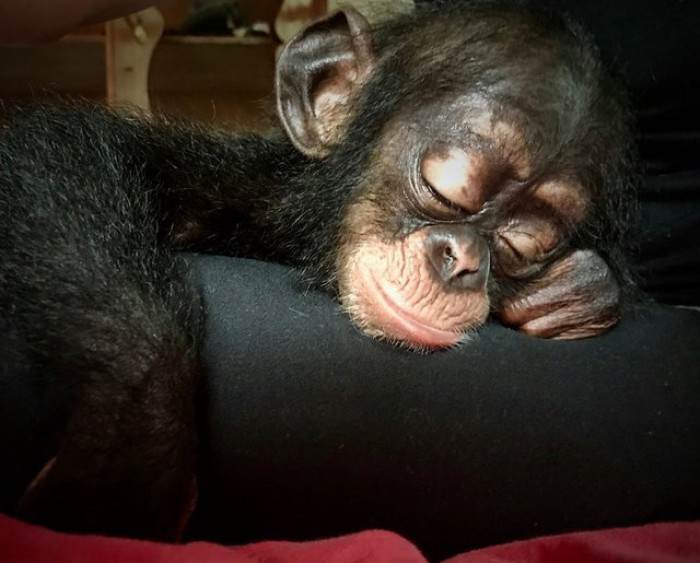 Living that way that Chance did took an extreme emotional toll on her. When she was rescued her eyes looked vacant and she showed stereotypic behavior by rocking back and forth. She also had this piece of clothing with her that she clung to and it seemed that it provided her with comfort.

"Her rocking and clinging to the cloth are clear indicators of stress, trauma and a severe lack of attention and nurturing," Desmond said. "Chimpanzees who have 24/7 surrogate mothers do not have a need for these types of comforts as they are clinging to their ‘mothers’ and receiving the comfort from them instead." 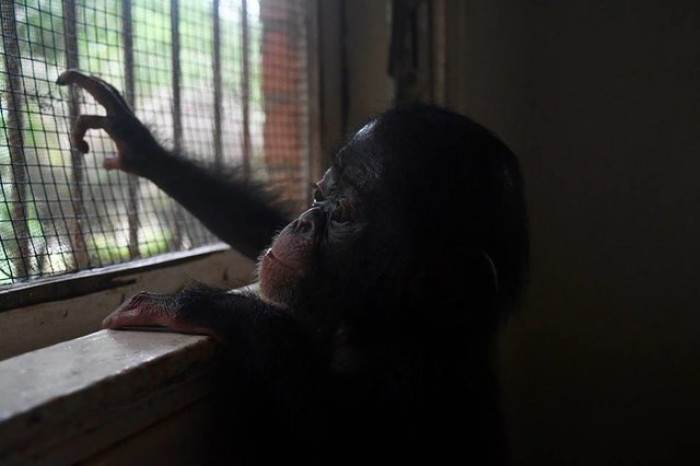 Chance's physical condition was very alarming to LCRP as she was very skinny, underdeveloped for her age and malnourished. They then realized that her owners only fed her cornmeal and rice.

Another problem was the fluid build-up in her head that would have occurred from a head trauma. They then knew they had to get her out of there as quickly as possible and unfortunately her piece of clothing was left behind.

But Desmond immediately realized this and gave her a new soft and wooly blanket to hold onto. 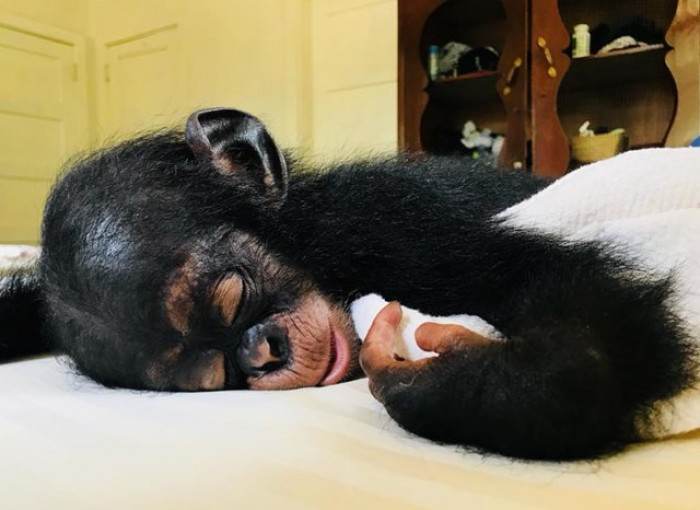 When they took Chance back to the rehabilitation center she remarkably got a little bit better. She stopped depending on the blanket for comfort.

"We give all the little ones blankets at night and they are certainly welcome to carry them anytime," Desmond said. "It is generally our experience, however, that their need for the blankets as unhealthy sources of comfort disappear rapidly with increased care and proper nurturing." 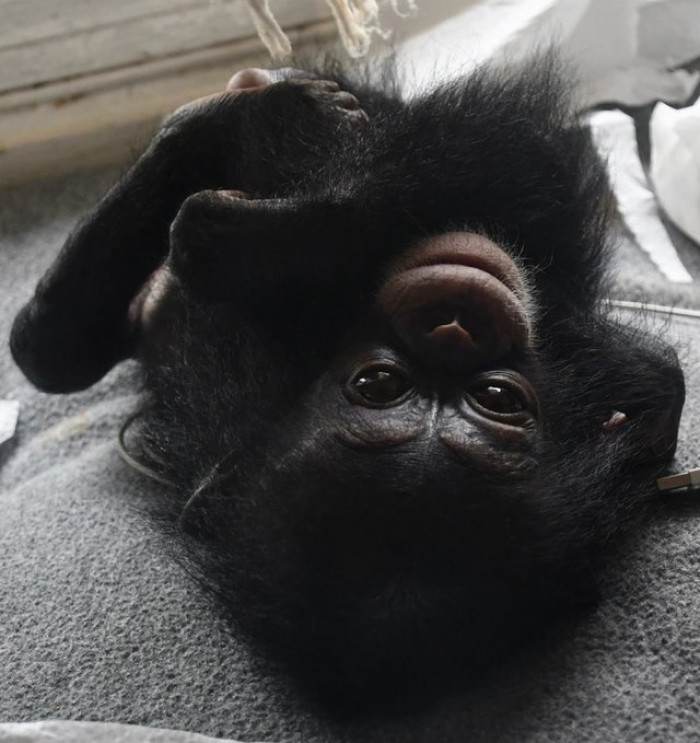 She has also stopped rocking back and forth and started to stand up on her own and raise her arms to be picked up. Desmond says this is a great sign! She also started to wrap her legs around Desmond's waist and not hold her feet when she is being carried, which is perfectly normal.

"She is progressing and recovering rapidly," Desmond said. "We have found chimpanzees to be unbelievably resilient."

Chance is doing so much better know that she even started to laugh and smile, which of course warmed the hearts of her caretakers. "It’s been very uplifting seeing this beautiful little girl blossom before our eyes," Desmond said.

Over the next few years, Chance will receive 24/7 care that will help her grow strong and healthy, with the help of lots of love and good food. Once she is ready to tackle the world again they will introduce her to the other young chimps at the rehab center. 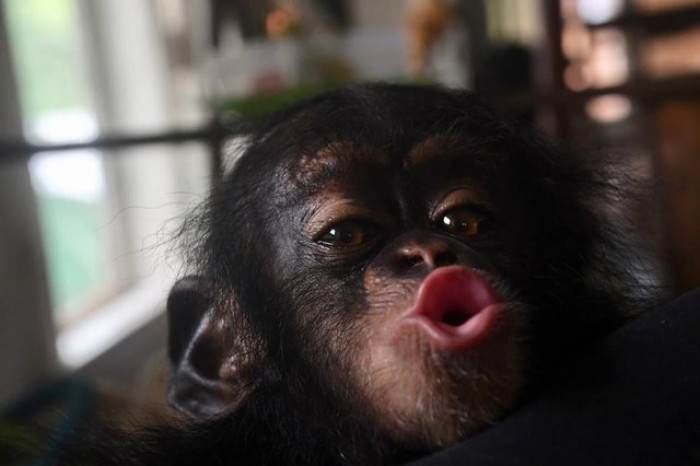 "She will be introduced to other chimpanzees in a safe and slow process, allowing her to choose the level of interaction and time with other chimps," Desmond said. "Slowly but surely, she will be integrated into our youngest nursery group and will never again be without chimpanzee family members."

Nobody knows if they will be able to release little Chance back into the wild, but it is their main objective, but it will take a long time before they can do that. 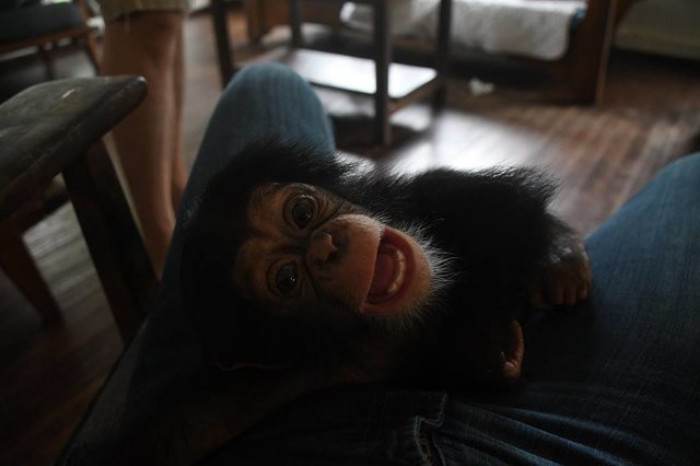 "Returning to the wild, known as reintroduction, is a long and complex process and while we dream of this it is not simple or assured," Desmond said. "There is hope for chimpanzee reintroduction in Liberia as chimpanzees naturally occur here, and there are still large tracts of forest remaining. Reintroduction involves many factors and multiple groups and experts to assess and determine feasibility."

If they, however, can't reintroduce her to the wild they will make sure she will have a happy and long life at the center. "I expect full rehabilitation and she will live in a seminatural spacious forest environment with other chimpanzees for her lifetime," Desmond said.