Think for just a second how tall you are. It's a safe bet that you're in the 5 to 6-foot range, give or take a few inches. Now multiply that by 3. Can you imagine facing a snake 3 times your size? I certainly couldn't. Yet for one python hunter in the Florida Everglades, that monstrously sized snake was a reality and he faced it head-on.

The veteran python hunter bellowed out the statistics on the impressive snake, stating:

[the snake] could kill any full-grown man.

It was just last week python hunter Jason Leon broke the South Florida Water Management District's standing record. The agency released the statement on Monday, exclaiming the new record from him when he killed the 17-foot long Burmese python in southern Miami-Dade County at around 2:45 a.m. Friday.

Jason spoke with NBC6 and said:

That snake could pretty much kill any full-grown man. If that snake was alive right now it would probably take like three of us to be able to control that snake. 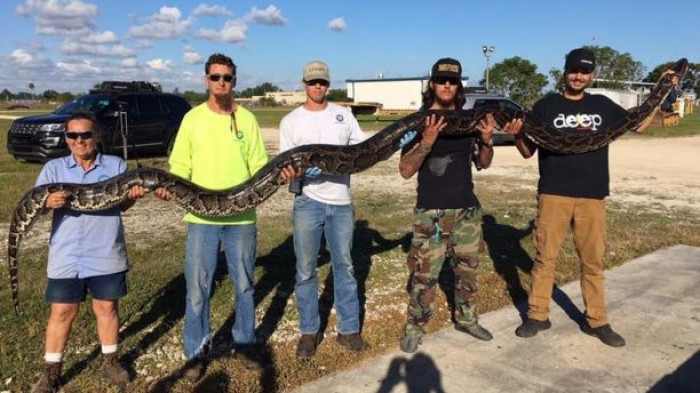 As apart of the agency's Python Elimination Program, Leon has broken more than one record. Alongside this latest catch he holds the state record with an 18-foot-8-inch python he caught back in 2013. But this snake is quite the beast. At 17-foot, 1 inch, and weighing a monstrous 132 pounds it is surely a serpent that will humble you. 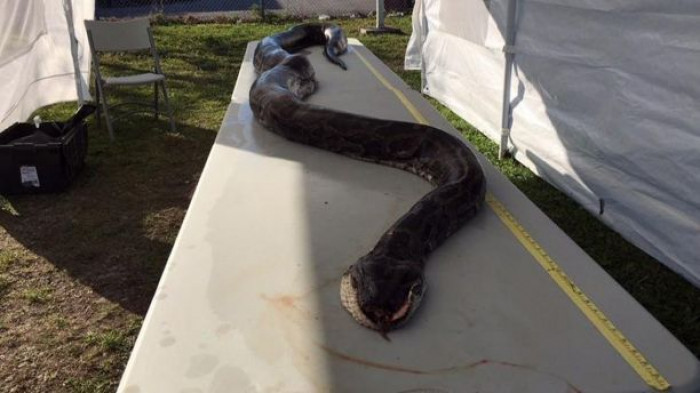 As the photos broke out a bit on the Internet, stunning and almost terrifying those who saw the massive snake, it became relevant to understand why the state even has a "Python Elimination Program" in the first place. According to the South Florida Water Management district, the Python Elimination Program asks licensed South Florida hunters to remove the invasive animals in order to protect native wildlife. According to Leon, the Burmese python is devastating wildlife in the Everglades with its 'uncontrollable appetite.'

We have these guys out there eating our alligators, raccoons, possums, otters, pretty much everything out there. There's no natural predators too.

According to the agency, since the Python plan began in March of 2017 over 730 pythons have been removed from the Everglades already. The program pays hunters an hourly wage of $8.10 and an extra $50 for a 4-foot-long snake and then $25 for each additional foot beyond that! The hunters that caught this beast will receive an impressive $375 for bringing it in. The program has a decent budget of $125,000 and plans to continue hunting the snakes until the budget runs out. But, Leon warns against just anyone running out and trying to hunt a python down themselves, especially if you're alone:

If you see a snake this big, I don't think you should jump on it, at least if you don't have somebody else with you.

Python hunter Jason Leon set a record for the SFWMD Python Elimination Program with this 17-foot-1-inch Burmese python that he brought to the District's Homestead Field Station today. pic.twitter.com/p6iNnTex6H

In the video posted by the agency, Leon says he spotted the female snake in submerged water, grabbed her and quickly shot her in the head while still holding the snake. There was also a smaller male python nearby, but he was not captured, Leon said.