Being a kid these days is hard. It's tough stuff, man. The world is full of temptation and everyone around you seems to be encouraging you to head down those "bad" paths like there's no tomorrow. Which means being a parent is actually way harder than being a kid. Parents, for the most part, just want a few things and they all surround having a healthy, happy kid who comes home alive. Yet if there's one thing teenagers are notorious for it's being liars. They do it constantly, compulsively, irrationally. It's just a part of the process of growing up. So what is a parent to do when their kids are out and about in the world being offered drugs, alcohol, and sex and they're constantly reminded that their teenagers are probably lying to them?

Devise a plan, of course. Which is exactly what this mom did. 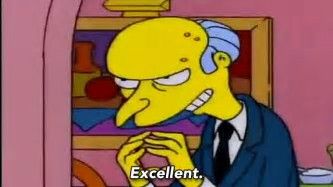 Heather Steinkopf, for the most part, is like any other mother of a teenager out there, aside from the fact that she concocted a plan to determine when and where her daughter is telling the truth (or detect her lies!)

Lots of parents try to keep tabs on their teens but for 18-year-old Katelyn, her mom has raised the bar. 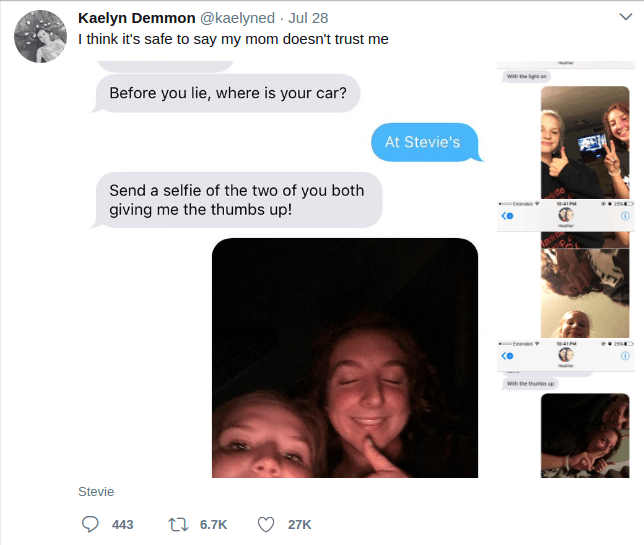 Heather (mom) makes Katelyn (potentially lying teenager) fire back selfies with specific instructions that either validate the story given before Katelyn left the home that day or evening, or prove she's lying!

But Heather makes sure to explain that the trick is not always demanding a selfie. It's a spontaneous decision that could happen at any given outing... or not. That way, Katelyn doesn't know if today's the day she's going to get busted or not.

As simple as it sounds, that's not where the story ends today!

The biggest question on everyone's mind is: why the thumbs up?

Katelyn and her friend send a selfie at mom's request: 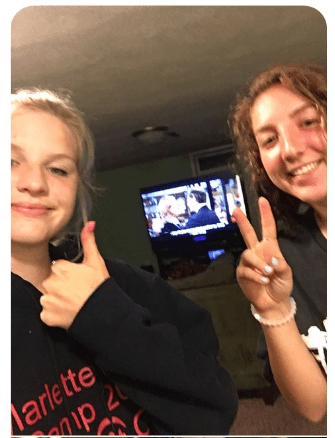 According to Heather, it is so her daughter can’t just use some old photo in the place of a selfie! An all original, on demand selfie... just for mama.

Lots of theories roll around about what led Heather to this plan and some think it's because she must have been quite the rowdy teenager herself, while others say the same thing I said earlier: parents just want to make sure their kids are safe. It's a dark world out there!

Twitter, as usual, has been weighing in and lots of people (teenagers and moms alike) have something to say about Katelyn and Heather's communication skills.

Some teenagers can relate...

While other teens are grumbling to themselves, "well I'm glad this wasn't MY mom or I'd have been  in a lot of trouble."

I'm glad my mom never went through this stage bc I was a liar :/ https://t.co/b5NhoXt1pZ

And even more hilariously? Some adult women are still dealing with "this mom."

Girl, we must be sisters, cause we have the actual same mom

Sidebar: I'm 26 and haven't lived at home for 9 years https://t.co/HJbEvkm7Ut

But honestly, it warms a mom's heart to see another mom looking out for her young ones.

We feel pretty confident that there are worse things that protective parents. Heather is certainly not "over-protective." She just wants to make sure her kiddo is safe. And when you have lots of young women weighing in from their personal experiences saying they were the liars, it's no wonder Heather is so dedicated to making sure Katelyn is safe.

Truly, technology has made parenting at least a little easier.

Of course, for some parents... there is no place on Earth safe enough for their kids.

Okay, maybe it's not a ton of fun for all the teenagers. But hopefully some day if they become moms themselves they'll understand, it all comes from a place of love.