The Shocking News of a Scammer Shaving Kittens and Selling Them as Sphynx Kittens!

Sphynx cats are a rare and unique breed of cat that has been around since the early 1960's. They are famous for their seemingly hairless appearance and spunky personality traits. They are one of a unique breeds of cats known today and some people are absolutely diehard obsessed with them. It's not hard to see why they're incredibly beautiful cats! Typically a Sphynx kitten will sell for anywhere from $800 to over $2,200!

Recently in Alberta Sphynx kittens are creating quite the stir but not for the reason you would want to see these awesome cats being talked about. Someone is scamming buyers into buying what they think are Sphynx kittens when in fact they are regular cats. In a shocking and horrifying tale of animal abuse, the scammer is plucking the whiskers of the regular kittens and then using razors and hair removal creams to create a temporary hairless appearance to the poor animals.

Such was the case with JoAnne Dyck, an Alberta woman who paid $700 for a kitten she thought was a Sphynx after she responded to an ad online. Dyck said that the seller said they were in Calgary but could have the kitten delivered by a friend.

When the poor kitten, named Vlad, was dropped off at JoAnne's Red Deer, Alberta, home she didn't think twice about the sweet little guy. She told CBC News, "It looked like a Sphynx because he was very, very skinny and his face was really angular.”

Yet Dyck, a veteran Sphynx owner, noticed quickly that her newest family addition did not act quite right. In retrospect, Dyck sadly recalled to CBC News, "I thought he was crying for his mom, but he probably was in pain." 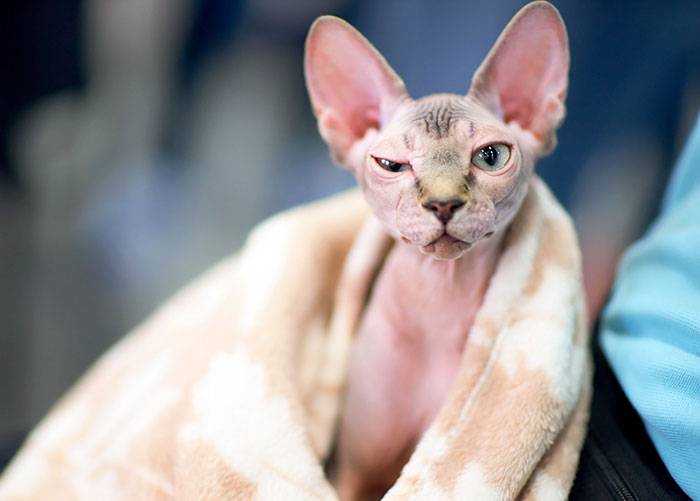 It didn't take long for Dyck to realize her newest addition wasn't behaving like her other Sphynx cats and since he wasn't getting along she decided to sell him to another woman. Dyck thought she was just finding a better home for the poor kitten but as she continued to communicate with this other woman they started to notice some startling things pretty quickly.

Dyck went on to explain:

Me and her talked back and forth the next couple of days about him, because he wasn’t seeming to really calm down. And she took him into the vet and the vet said the cuts on his skin were most likely caused by razor burn or Nair or something like that

The vet also informed the women that the cuts on Vlad's tail were so infected that they nearly led to amputation of the poor baby's tail.

Thankfully today Vlad is alive and well, living a luxurious and loving life with the woman that Dyck sold him to.

The only silver lining here is that Vlad is a very healthy and very loved cat today!

Look at these kitties! 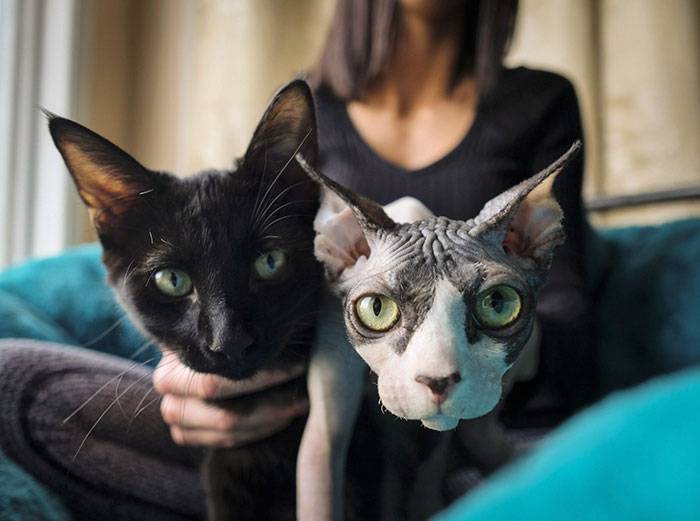 via: Boredpanda
This is poor Vlad. It didn't take long for the baby's hair to start growing back. Only a few weeks, in fact, and it completely shocked the owners.

This precious kitten may look cute but it has to be in pain after the torture it endured having its whiskers plucked. Looking at this, it's not impossible to understand why someone would think it is a Sphynx kitten. 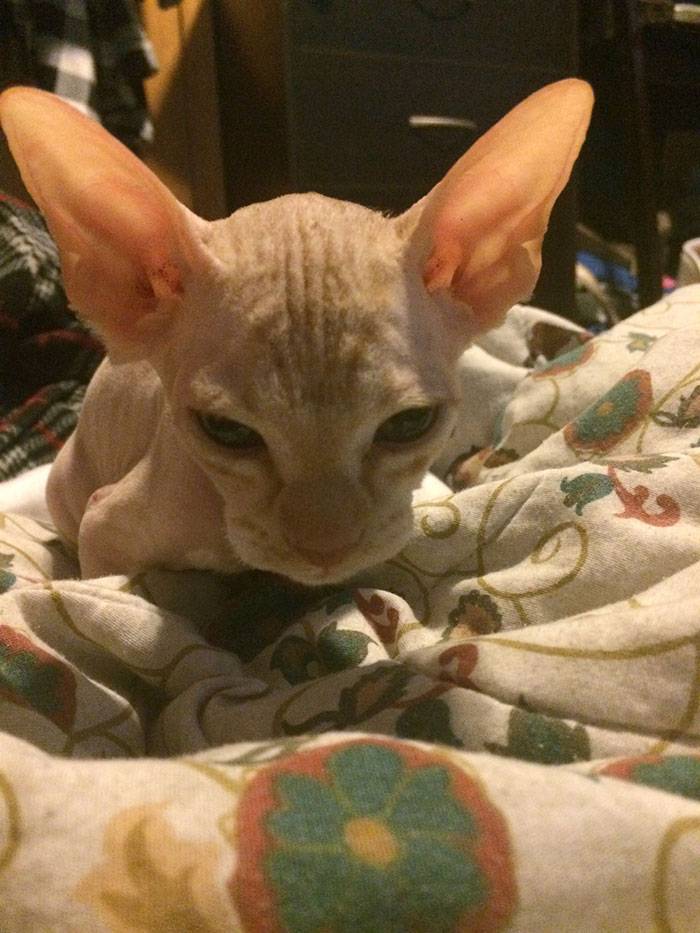 Dyck said she called the Calgary Humane Society but was unfortunately informed that they couldn't do anything without relevant information like the seller's name and address and The Alberta Society for the Prevention of Cruelty to Animals told her there was nothing they could do "as the trauma had passed and the animal had seen a vet."

Dyck seems devastated, feeling like no one could help them in this situation.

It's pretty crazy. I've always thought that all these animal people were supposed to help you, like the SPCA. You hear about them doing all these great things, but it just seems like they couldn't help us.

This cat is happy and healthy today but was once believed to be a Sphynx. 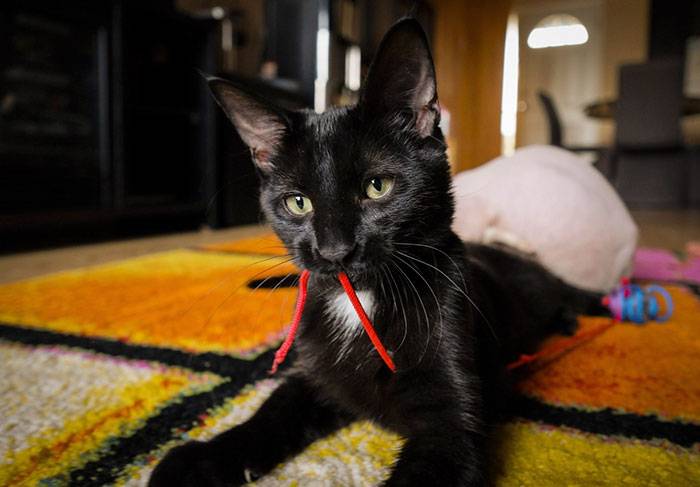 via: Boredpanda
This sweet black cat was sold to Shayla Bastarache as a Sphynx for $650. At least the baby is happy and loved today. 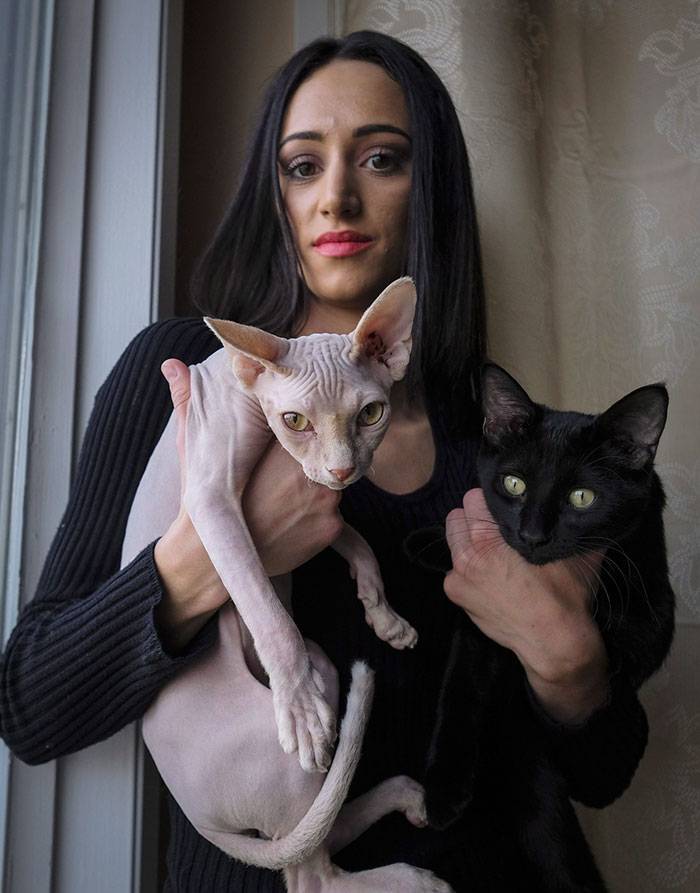 A spokesperson for the Calgary Humane Society reportedly said that they told Dyck to file a report but without relevant information to help the case Dyck has taken to social media to try and help prevent others from being scammed and after finding other buyers in similar situations has issued some advice to people looking to buy pets online and her advice is pretty solid:

Definitely go to where the cats are being bred. Never meet them anywhere. If they won't let you come to their house, their residence, it's probably a bad sign

Just be sure that it's a reputable breeder if you're looking for one of these specialty cats.
﻿