Look, no one is perfect. Making mistakes is basically a part of human nature. Even worse, we all have mistakes in our past somewhere that kind of stick with us, whether it be a hilarious story that family members bring up at every family gathering or a nightmare experience you spend decades reliving moment by moment in your mind.

My Grandmother loves to tell a story to me every time I visit, which takes a solid 20 minutes to tell by the way, about little toddler me who didn't know that a pail and a bucket were the same things. It's a cute story in retrospect but I suppose since it's been nearly 30 years that it is a story that will continue on for a few more years.

As with the rest of us and our hilarious yet embarrassing stories, freelance makesup artist, Gabriela Brandão from Florianópolis, Brazil, knew she had to share her family story as soon as she realized just how funny it was. Turning to social media, Facebook specifically, Gabriela posted of her nan's hilarious mistake. What was the mistake? Nan's beloved figurine of Saint Anthony was actually 'Elrond' from The Lord of the Rings! OK, who wouldn't find that funny? 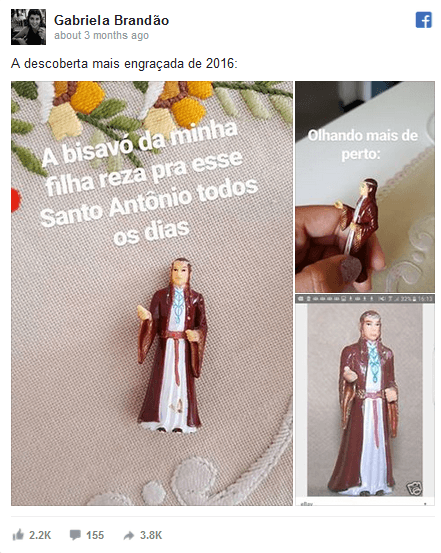 Her sweet, sweet nan had been praying to the Lord of the Rings figurine every single day, having mistaken it for Saint Anthony!

More photos, quotes, and translation on the next page! The best is yet to come...

The funniest discovery of 2016: My daughter's great-grandmother prays to this figure of Saint Anthony every day, but looking more closely...

It's not hard to see why the whole scenario is so funny, especially upon closer inspection of the figurine! 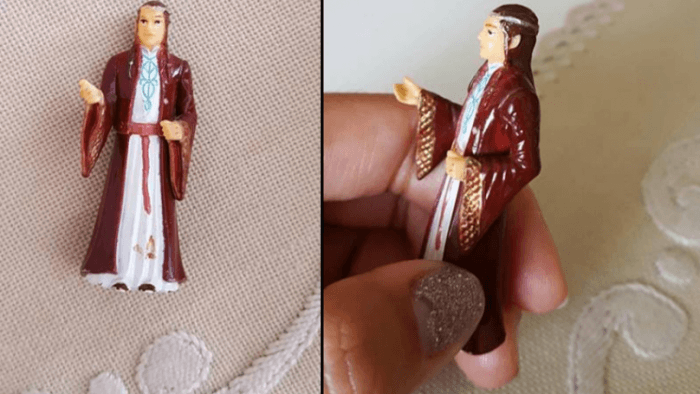 Since the post went viral Gabriela has continued to speak out about her hilarious discovery on her nan's behalf. Speaking to BuzzFeed, she said:

We tried to explain right away but she didn't understand at first. The next day we explained again and she understood and we got her a new figure of Saint Anthony.

Well, at least nan's heart was in the right place. I'm sure Saint Anthony doesn't mind too much.