An Uber scam called "vomit fraud" has been sticking its neck out in various cities in the USA and it's growing. What basically happens is, drivers that are part of rideshare use fake photos of their trashed seats to charge customers "cleaning fees" even though they didn't trash the seats.

Uber says these fees are for the driver's time and money for getting their car cleaned. But this case was a bit different as the guy claimed the Uber ride didn't even happen.

"I never saw the $157 charge because it was placed immediately before a legitimate Uber ride I took," Mike Platt from Detroit said. "Must be their tactic. I was only alerted when I saw that my credit card bill was suspiciously high about 30 days later."

Mike contacted the company's support department and after a long back and forth of messages he thought this was so absurd he should share it on the internet. "I’ve been using Uber since mid-2014," Mike said. "Never experienced anything like this."

"I’ve always liked Uber, never had a problem until this one. I was even going to give them the benefit of the doubt that this was a rare hiccup / driver-related fraud attempt until I had the awful experience with their customer service."

Mike even wondered if he was talking to a real human or to a bot.

"All would have been OK with me if they would have simply said ‘OK, sorry this happened, we will refund your money'."

Mike also thinks there are some things that the company can do to reduce situations like this.

"It would be nice if Uber had a help phone line to call ( I think they used to, must have gotten rid of it). I can see how chat-only systems may be cheaper / easier for them, but I would think they could afford it. I wonder how they can afford NOT to have it with things like this happening. Only thing I would add about my experience is that it was more confounding than frustrating for me."

Uber commented and said, "Participating in fraudulent activity of any kind is a clear violation of our Community Guidelines. We are constantly evaluating our processes and technology related to these claims and will take appropriate action whenever fraud may be detected."

They further stated that they have very specific criteria and a review process that is in place and if they find out that a driver has committed fraud they will be immediately taken off the app.

The conversation started with Mike asking for a refund. 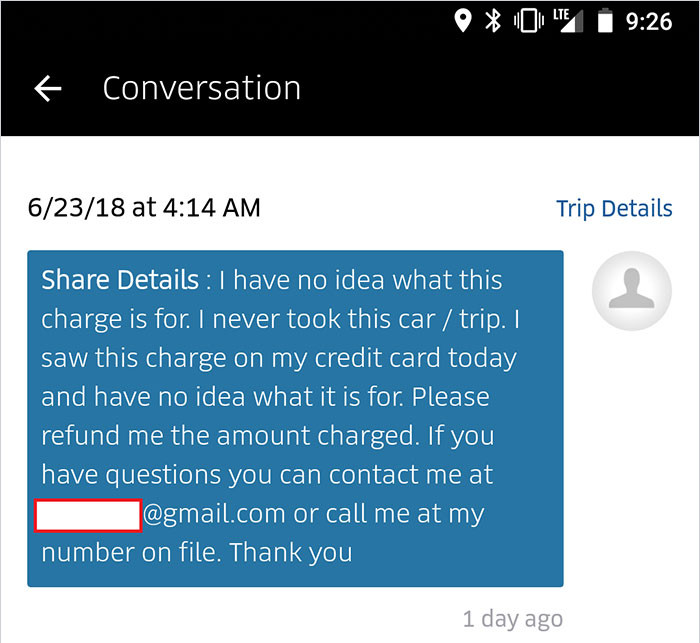 They responded with photos of the incident. 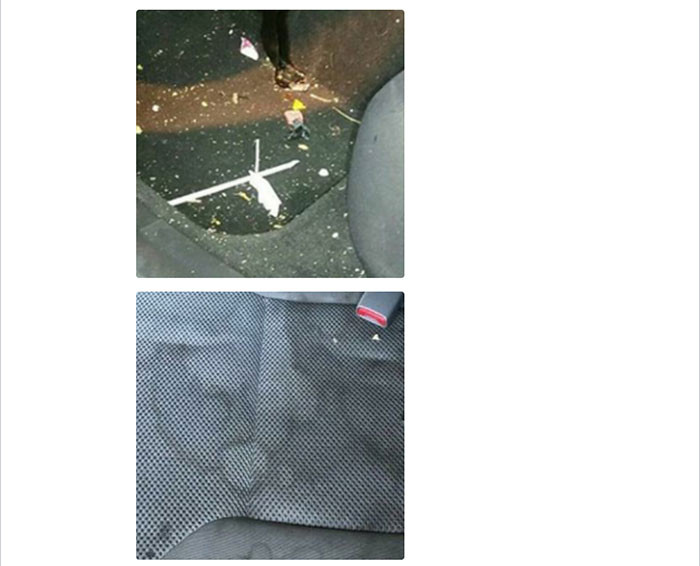 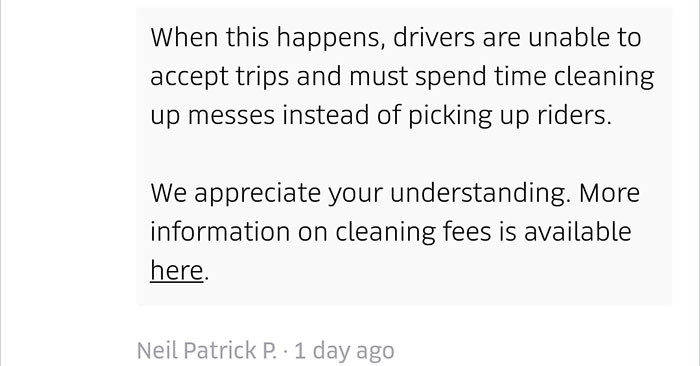 He went on and explained that it just doesn't make any sense! 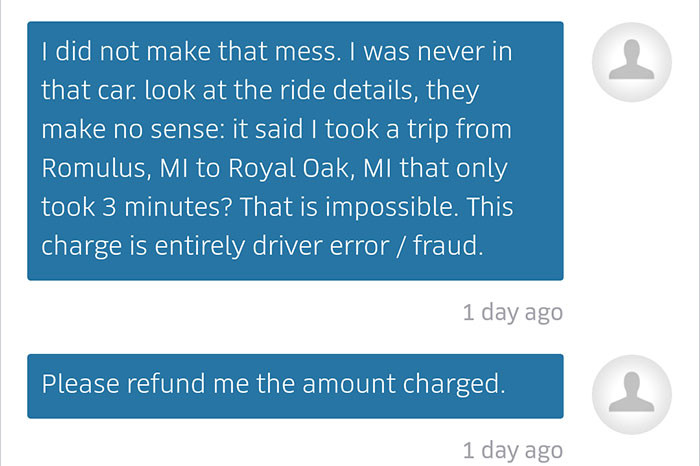 They wouldn't listen to him. 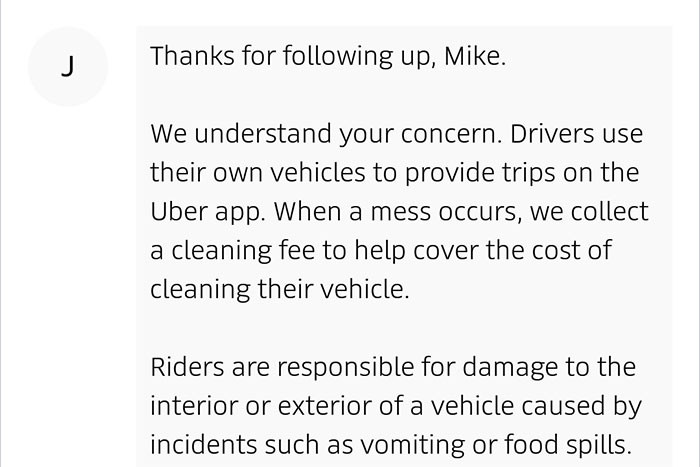 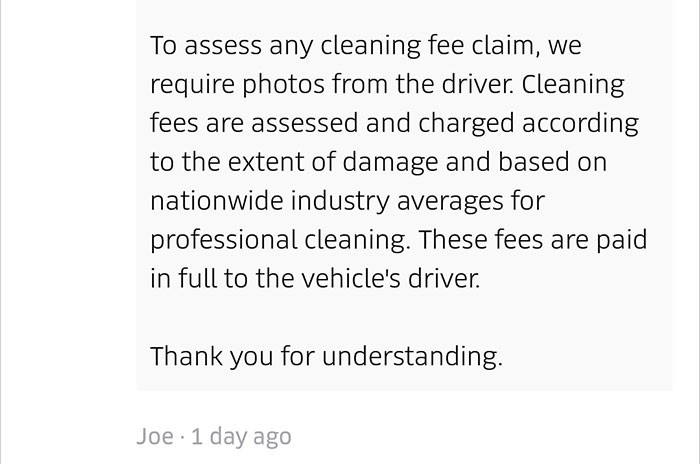 Mike kept on pushing to get his money back. 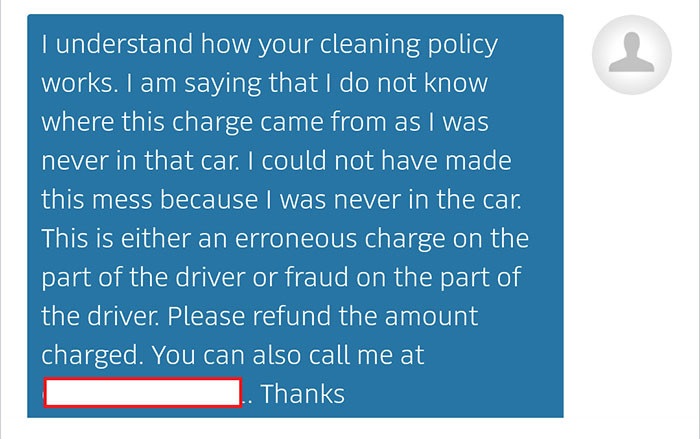 At last they refunded him. 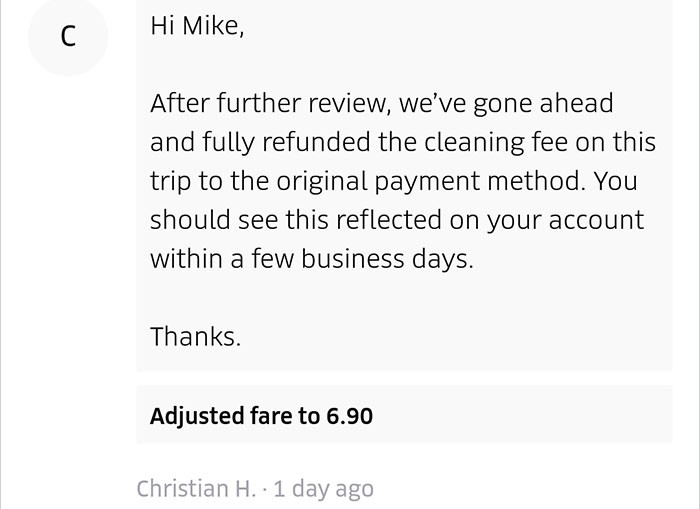 But unfortunately it wasn't the full amount. 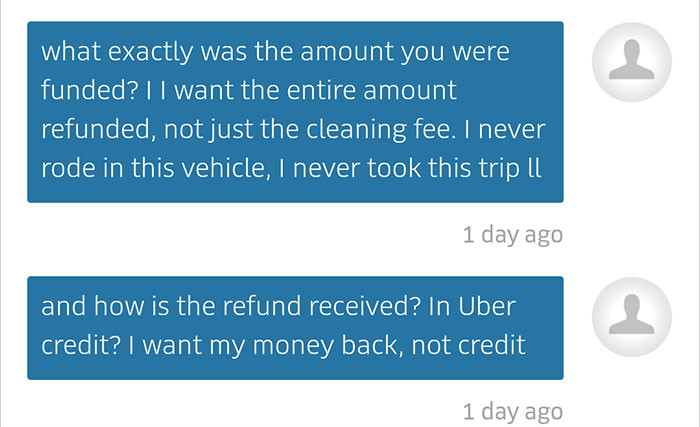 How ridiculous is this? 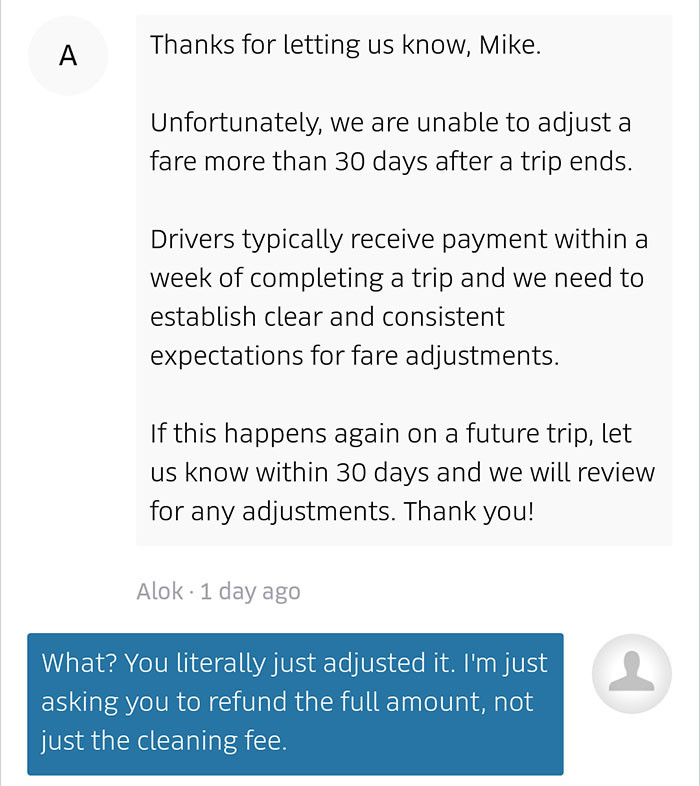 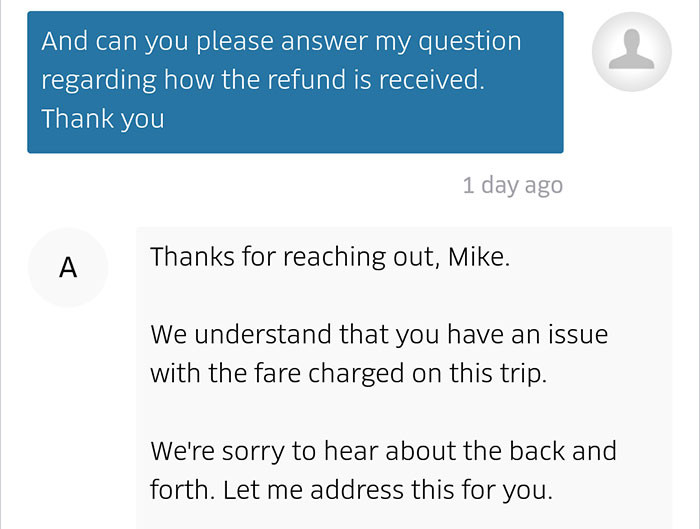 They are still not answering his question. 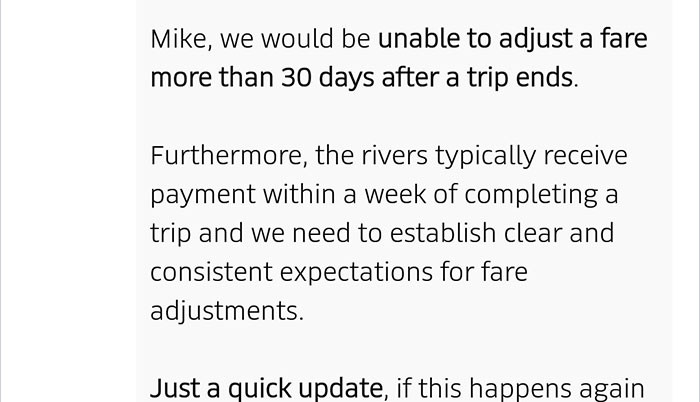 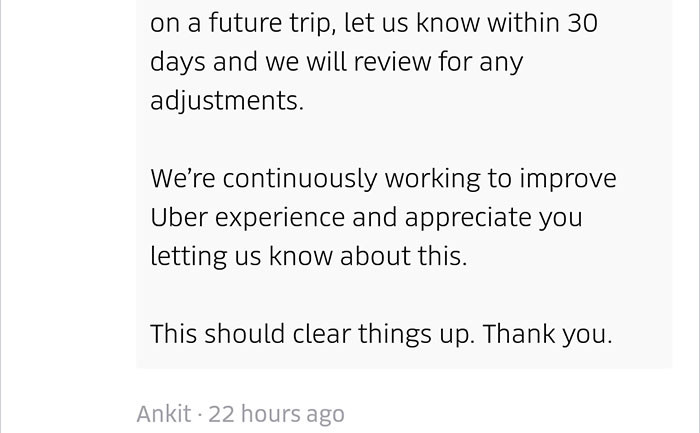 Some customer service they are! 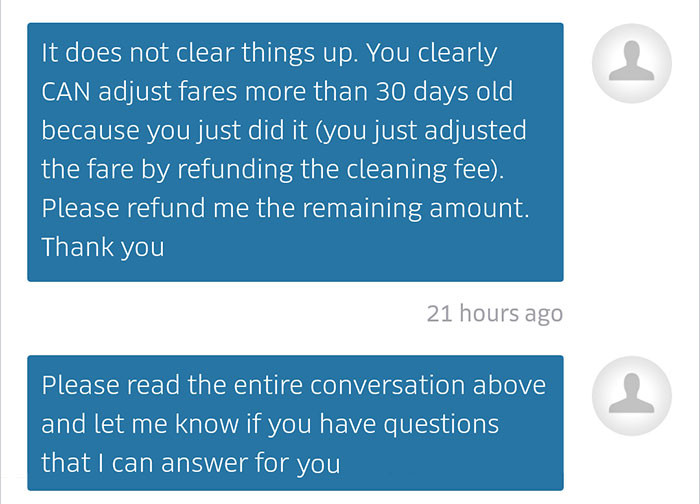 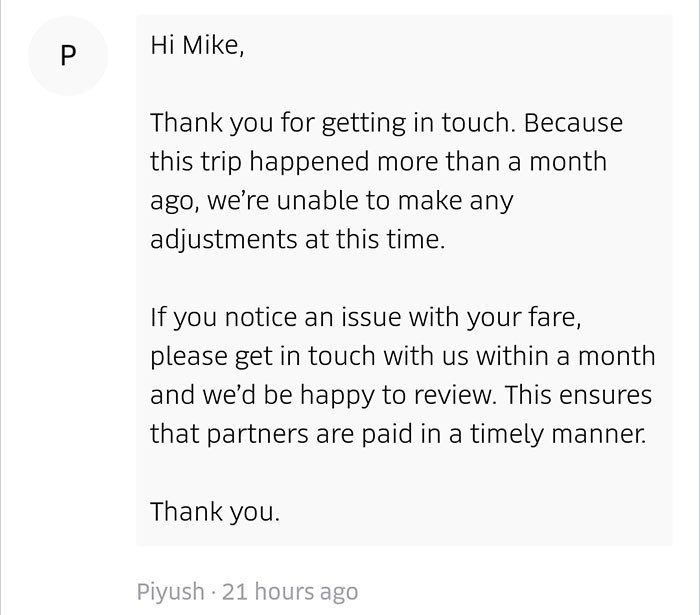 Go get them Mike!

They just repeat the same message over and over again. 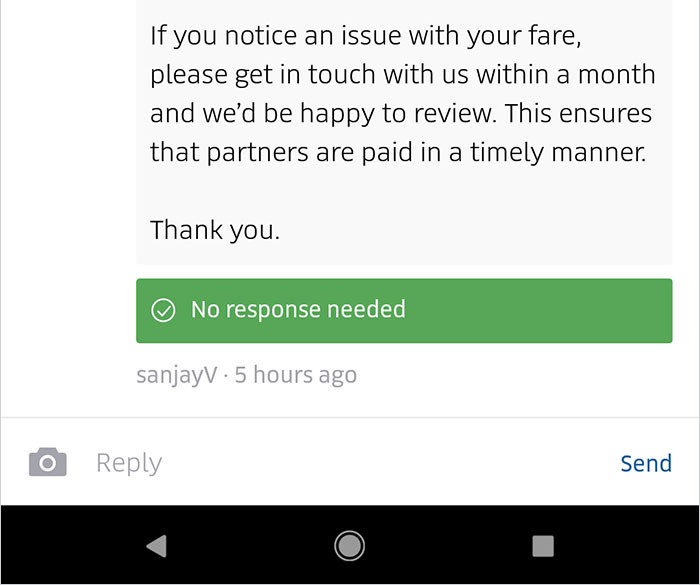 People started giving him advice on getting his money back.

Thanks to the advice of these kind people he was able to get his money back after he contacted his credit card company. As it turns out he wasn't the only victim.